You are browsing the site archives by month.
21Apr 2011

I will be teaching a short (4 hour) training seminar on the topic of mobile development using Qt Quick at University Miguel Hernández, Elche (Spain) on Thursday 21st April and Friday 22nd April. It’s one of the activities of the 7th LAN Party Elx. There will be t-shirts and stickers for the attendants, and a grand prize of a Nokia C7 phone, all of it courtesy of Nokia (thanks Alexandra and Thiago!). Free access.

“A wish a day” did very well in GSoC proposals

The deadline for accepting student proposals for Google Summer of Code was reached an hour ago, which means we are not accepting any new proposal and students cannot modify already-submitted proposals.

I have skimmed over the list and I am impressed: 8 proposals were received for 5 of my “wishes“! :-O

Not bad! It’s a pity I didn’t start this series earlier, because I still have a dozen more “wishes” waiting.

Mentors: go to Melange and vote, and also follow the instructions Lydia sent to kde-soc-mentor.

A wish a day 11: Perl Compatible Regular Expressions in CMake

CMake is a unified, cross-platform, open-source build system that enables developers to build, test and package software by specifying build parameters in simple, portable text files. It works in a compiler-independent manner and the build process works in conjunction with native build environments, such as Make, Apple‘s Xcode and Microsoft Visual Studio. It also has minimal dependencies, C++ only. CMake is open source software and is developed by Kitware. (taken from Wikipedia)

When I started to use CMake at work to port a large project from Windows to Linux, I needed to write a lot of modules (“finders”). Those modules had to work on Windows and Linux, and sometimes with different versions of some of the third-party dependencies. Parsing header files, Windows registry entries, etc was often required.

If you have ever parsed text, you know you powerful regular expressions are. If you use old software, you know how great Perl Compatible Regular Expressions (PCRE) are because you do not have them available :-).

END_OF_DOCUMENT_TOKEN_TO_BE_REPLACED

Microsoft Windows has supported a feature called Shadow Copy since Windows Server 2003, using Windows 2000 or newer as the client.

Shadow copies, better known as “Previous versions”, by many users are kind of snapshots of a filesystem (“drive”, for Windows users) taken every so often. It is not a replacement for backups or RAID, just a convenient method to access old versions of your files. Thin of it as a revision control system for any file, save for “revisions” are taken at time intervals instead of evey time there are changes, which means not all the changesets are “captured”. 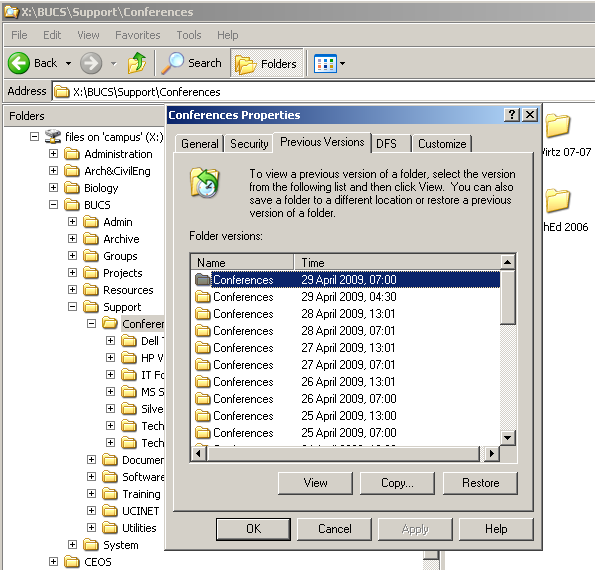 Samba implements the server part of shadow copy since version 3.0.3, released in April 2004, and makes them available to Windows clients.

On the Unix world, you can get more or less the same features, albeit only locally (not for NFS or Samba shared folders), by using filesystems such as ZFS, HAMMER (apparently, only available on DragonFly BSD), Btrfs, Zumastor and many others. The main problem being adoption of those solutions is marginal, and not available through the network (“shared folders”).

KDE once had something like that but for the ext3cow file system. It was an application called Time Traveler File Manager (user manual, interface design and details) by Sandeep Ranade. Website is down and ext3cow is effectively dead now.

By this time you probably have guessed my wish for today: implement “Previous versions” support for Samba, ZFS, etc in Dolphin, the KDE file manager, or even better: in KIO, so that it is available to all KDE applications.

When Stephen Elop announced Nokia was adopting Windows Phone 7 as its main development platform for the future, many of us felt a mix of fear for our jobs, incredulousness (are they committing suicide?), anger for betraying open source, then curiosity. What’s this WP7 about and what’s up in regards to development?

The canonical development platform for WP7 consists of Visual Studio 2010 and managed applications developed in .NET 4 using C# as the programming language and a WPF for the user interface. If you are not into .NET, you may be a bit lost now.

Windows Phone 7 is an embedded operating system by Microsoft. It is the successor to Windows Mobile 6.5 but it is incompatible with it and it is targeted at mobile phones.

Visual Studio is Microsoft’s development environment, including IDE, compiler, debugger, profiler and much more. In my opinion, it is one of the finest applications Microsoft has developed. It is many years ahead of QtCreator, KDevelop, Eclipse or anything else.

.NET is a framework Microsoft started more than a decade ago. It includes libraries, a language independence infrastructure, memory management, localization and many more features. Applications can be compiled as native code (for x86 or x64), or as managed code (bytecode). .NET also includes a bytecode JIT compiler. You can target the .NET platform in many languages, including but not limited to, Visual Basic .NET, C#, F#, C++/CLI (it’s NOT the C++ you know!), etc

Interestingly, you can also compile normal C++ to .NET but it will have unmanaged code (i. e. code where memory allocations/deallocations are performed by you instead of the runtime, and pointers). WP7 requires that all code that runs on it be managed. This means that Qt cannot run on WP7, even though it may be compiled targetting the .NET platform and it would run on desktop operating systems.

C# is a multi-paradigm programming language developed by the father of Delphi. It is very powerful and looks a lot like C++2011. When I was learning C#, I couldn’t but think what the actual implementation of C# features were behind the scenes, in C and C++.

When developing UIs in WPF, you can either use C# code:

or use XAML, which is an XML-based language for WPF:

More or less, WPF is to .NET what QML is to Qt.

Ouch. This WP7 is completely different to what we are used to. Maybe we can make them less different?

People tend to believe WPF and XAML are the same thing. They are not. XAML is one of the languages (which happens to be used by 99.99% of the people) to write applications in WPF but it is not the only one. You can write WPF applications in C# code (it’s not unusual to mix XAML and C#, what we call “code behind” in WPF parlance), or you could create your own XAML-equivalent language.

Or you could make my wish for today true: create a compatibility layer for QML to be able to develop WPF applications in QML, effectively replacing XAML. It is technically possible. This will also require a glue-layer for C#, similar to what we have now to bridge QML and C++. This would make porting applications from C++ and QML to C#, QML and WPF a relatively easy task, and may provide realistic path to convert Qt applications to WP7 withouth a full rewrite.

My last wish was born when Koen Deforche (one of the best software developers I know) made an innocent comment at my talk at FOSDEM talk this year.

Koen happens to be the guy who created Wt (pronounced ‘witty’), a C++ library and application server for developing and deploying web applications. The API mimics Qt‘s: it is widget-centric and offers complete abstraction of any web-specific application details. Where Qt has QObject, Wt has WObject; where Qt has QPainter, Wt has WPainter; both provide a very similar Model-View architecture, both have signals and slots (Wt’s being based on Boost), both provide an OpenGL widget (WebGL in the case of Wt), both allow for language translations, and in fact you can combine Qt and Wt code thanks to the wtwithqt bridge.

If you know me, you know I love Wt. Developing webapps like they were desktop apps (thinking of “widgets” instead of “pages”) is very powerful. In fact, I gave up on Rails after I discovered Wt because Rails has become a spaghetti of Ruby, Javascript, CSS, HTML and whatnot, with so many conventions that make it very difficult to follow the code unless you know very well every library involved (not to speak of performance and memory consumption, where Wt beats everything).

Wt is not without its problems, though. In my opinion, the main needs of Wt are more widgets and an IDE. Today I’m going to talk about the IDE.