You are browsing the site archives by month.
28Feb 2011

The news broke in last week in the Qt community: Qt SDK, in whole, has been ported to Android.

Was it Nokia? No, it wasn’t

Maybe Google? Not either

It’s been a Romanian developer called Bogdan Vatra. In his spare time.

I interviewed Bogdan for Behind KDE last week and today the interview went live. Want to know more? Start reading!

Now we only need Android-phone owners to start porting KDE libraries, applications and all the eyecandy to Android. Sadly, I do not own an Android device 🙁

I have been packaging for Debian for a few years now. My first “serious” package was Wt back in 2007, but I had been backporting for Ubuntu for at least 2 years already, which means I have been doing .deb packaging for about 5 years (!).

Last week I decided it was about time stop nagging my sponsors (Vincent Bernat, Thomas Girard and Sune Vuorela) every time I wanted to update the packages I maintain (witty, ace and libmsn), and I finally started the Debian New Maintainer process.

The main reason I had not applied for Debian Maintainer yet was it requires some bureaucracy and, well, I’d rather spend my time coding or packaging than doing paperwork 🙂

I sent my Declaration of Intent and soon after, Thomas and Vincent replied and supported my application with very very nice and kind words. Thank you, guys! I’m flattered! 🙄

Had I known I would be buttered up so much, I would have certainly applied a long time ago! 😀

But you know what is the best part of this? It shows how open source projects take advantage of all the tools and communications channels we have (IRC, mailing lists, sprints, conferences, etc), and make distributed development work very well: here we have a 900-developers project in which two French guys are praising an Spanish guy they have never, ever met face-to-face (only e-mail, occasional IRC, and the most important of all: code review). Meritocracy at its full extent. Have you ever seen that in a traditional 100,000 workers company with hundreds of developers working in a single project?

My talk at FOSDEM

First talk in the CrossDesktop room on Sunday: KDE on Windows. I expected no more than 10 people to wake up early in the morning and attend a Windows talk, yet about 40 showed. Lots of problems with the projector 🙁

I gave the usual talk (slides) and showed KDE running on Windows 7 and Windows 2008. I had some problems while trying to show KDE applications running through Terminal Services and published with 2X but hey, it works (what you want to know: make sure you do not use graphicssystem raster!)

I insisted a lot on our need for more developers, especially packagers for third-party dependencies. Packaging a 3rd-party library for Windows using emerge is rather easy, it can be done by people with relatively few programming skills and, in any case, it is a good way to get started with development on Windows.

In the Q & A session there were the usual questions and Koen from Emweb made an interesting proposal. I think it deserves its own blog entry.

We just learned about the Nokia and Microsoft strategic partnership today and many people are concerned. I think the agreement is worrying for Qt, but even more worrying for Nokia. I foresee an exodus of current developers and Nokia mobile device users. Many Windows developers will come. Hopefully?

I really wonder who is actually benefited by this strategic partnership.

On the other hand, Microsoft had an operating system but no users. Virtually nobody wanted Windows 7. It was either Android or your own solution (MeeGo, WebOS, Bada, etc).

In my opinion, the next move we will see is Microsoft buying Nokia to be able to compete one-to-one with Apple and Google. I think it will not take too longer, probably they are just waiting for Nokia stock to fall a bit more.

In my opinion, when Nokia acquired TrollTech, they should have released at least 10 devices with Qtopia. Immediately. And dump Maemo.

In parallel, they could have added more and more Maemo features to Qtopia. By doing that, they would have had a good mobile operating system and applications in no time. There was even an X11 compatibility layer for Qtopia back then.

I did not understand why Nokia adopted Qt and went on with Maemo and Meego based on Gtk+, and tried to keep as much backwards compatibility (regarding to source compatibility, development methodology,e tc) with devices which barely had users (N770, N800 and N810). I think noone understood that move. From my point of view, that was a waste of time, money and effort, which ultimately led to Nokia’s demise.

PS: Yes, I still am a KDE on Windows developer and part of the Debian Qt-KDE team

FOSDEM ended yesterday and here I am sitting at Charleroi Airport (also known as “Brussels South”, quite a misleading name given that it’s 80 Km from Brussels).

I have already passed all controls, check-in and everything. While I wait for boarding, I am watching the shameful spectacle of airport personnel (let me reiterate that: airport personnel, not Ryanair’s) enforcing RyanAir’s 10 Kg cabin baggage limit. According to RyanAir, they want to minimize the weight the plane carries to use less fuel. So far, so good.

Here is what I have seen: people who do not carry any baggage (very few, they have probably checked it in because it exceeded size or weight), people who are below the 10 Kg limit and people who are way over it (and have been told to check luggage in). I am OK with those cases.

There is still a fourth case: people who are slightly over 10 Kg.

I’ve seen a woman whose bag was 10.15 Kg to be told to pay 20 EUR to check her bag, or go back to the RyanAir desk to check-in the bag. She opened her bag, took a scarf, put it on and now the bag matched the weight limit.

Yes, RyanAir is charging 20 EUR/Kg for hand baggage from 10 Kg on. What a rip-off.

A couple of East-European girls were about 1 Kg in excess each. They put a couple of extra jumpers on and now baggage was under 10 Kg.

Many people were about 1 Kg in excess. When they were told their suitcase better got lighter or pay 20 to 40 EUR. Most of them just took something (camera, food, slippers, whatever) and put in the pockets of their coats. Fortunately, RyanAir is not charging for body and clothes weight (yet?).

In all those cases the plane will end up transporting the same weight and RyanAir won’t get one more dime, so why RyanAir? Why are you such a shameful company? Why are you enforcing ludicrous and pointless policies? Don’t you know after passing the control everybody just put everything back into the suitcase? Of course you do.

So after watching this ridiculous spectacle go on for a while, I had a devious idea: let’s organize a fat people conference and fly them all over to and from using RyanAir. Further, all of them should carry exactly 10 Kg hand baggage.

When I talk to people about the CMake build system, they like the fact that it generates native project files for the tools you already use (which makes possible to use distributed compiling, debugging, etc). Next to that, Visual Studio and autotools users complain about bootstrapping not being possible.

If you are using Visual C++, solutions probably work fine for you and it is a fact they work out of the box with VC++. However, do not even try to move to another platform (Linux, Mac…) or another compiler on Windows because it will not work.

If you use autotools, you generate the configure script on your development machine and your users just run it to prepare makefiles. Only a Bourne-compatible shell is required when trying to build. Moving to Windows, particularly Visual C++ will be quite hard.

CMake is in my opinion one of the best build-systems out there but there is one problem: you need to have CMake in order to build a CMake-based project.

Now add third-party dependencies, which probably use a different build-system, to the mix and suddenly building your software has become time-consuming and complex. In terms of money, that translates to lost revenue because there is a high probability people evaluating your software will give up before they even have something to test.

Nokia solves this by distributing Qt binaries for the most popular compilers (MSVC2005, MSVC2008, MinGW). But there is always someone using a different compiler: MSVC2010, a different flavor of MinGW, Embarcadero C++ Builder…

KDE on Windows solves this by having its own “meta-buildsystem” called emerge, which is written in Python, which adds a dependency on Python when you want to build.

Can’t we do better? Can we get all the advantages of CMake yet not depend on CMake being available?

Yes, we can. I tried to do that for Wt and implemented it in the form of winstng. It’s a small batch file for Windows and a Bash shell script (for Unix; I didn’t manage to remove one bashism) which automagically download, build (if needed) and install CMake, all the third-party dependencies, build them, and then download Wt and install it. Everything ends up in a self-contained location which you can move around*. And you do not need administrator permissions. Tested on Windows, Linux and Mac.

*For now that’s only true on Windows, on Unix platforms I have not removed the rpath for some libraries which use build systems other than CMake (namely, OpenSSL).

Another year, another FOSDEM. Yay, I’m attending again! The biggest open source event in Europe, with more than 200 conferences and 5,000 people. 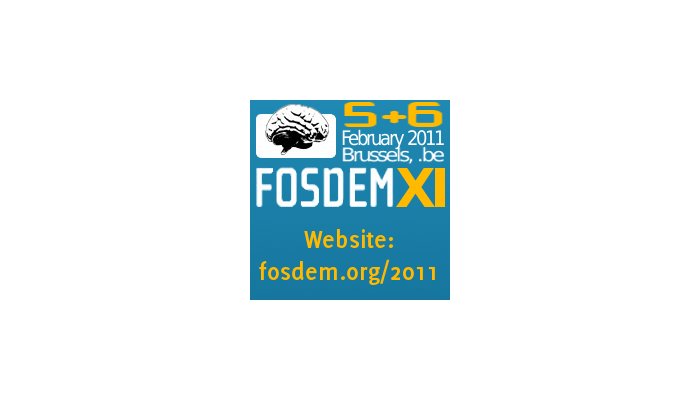 This year I will be talking about KDE on Windows. Sunday, 10.15, CrossDesktop Room (H.1309). If you are interested in helping us with KDE on Windows development, in making use of KDE on Windows for your application, or just want to use your favorite KDE applications on Windows, then you should come.