You are browsing the site archives by month.
25Apr 2007

I have started a new open source project called Destral. It is a command-line utility to split and join files, much like Hacha and HJSplit.

The main advantages of Destral over Hacha and HJSplit are:

There is no release yet, if you are interested you will need to access the code via Subversion. The only dependency besides a C compiler is CMake, but it’s possible and easy to build it without CMake.

Known bugs: there is an issue I just discovered with the names of the joint file under certain conditions, I will fix this soon.

In Spanish-speaking forums and websites a lot of people use Hacha (a win32-only app) to split a large file into several smaller chunks. English-speaking people prefer HJSplit, which has a Linux version called lxsplit.

On one hand, I cannot understand why people keep using these programs as you could just use a compressor (WinZip, WinRAR) and set the compression ratio to zero: it would be as fast as Hacha and HJSplit and everybody already has WinZip and/or WinRAR. On the other hand, I cannot change people’s mind and using wine to run Hacha is a pain in the ass in my 64-bit KUbuntu (32-bit chroot, yadda, yadda).

I have tried to contact the author of Hacha to no avail. I suspected the algorithm was easy but I like to play nice: I kindly requested information about the algorithm Hacha is using to split files. After some weeks without an answer, tonight I gave KHexEdit a try and you know what? I was right: the split & join algorithm in Hacha 3.5 is extremely simple. 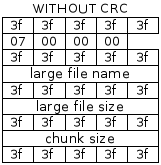 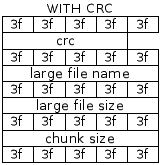 There is a variable-length header which consists of:

And that’s all you need to know if you want to implement the Hacha 3.5 algorithm. I will be doing that in the next few days and releasing this program under the GPL.

Update I had not realized there is CRC information. The information I had here corresponds to the trivial case (no CRC), but I’m yet to find out the CRC algorithm. Reversing CRC – Theory and Practice seems a good starting point.

It’s been five and a half years now since the Twin Towers attack and Osaba Bin Laden is yet to be found. As time goes by, more and more is known about the ties between the Bush family and the Bin Laden family and how the Bin Ladens were let go without any questioning right after September 11th.

I, therefore, have come with a new hypothesis trying to explain why nobody has found Osama Bin Laden after more than five years of search.

Essentially, it goes like this: the Bush family played some dirty tricks on the Bin Laden business and Osama wanted retaliation. How to get retaliation against a so powerful “enemy”? Use someone without him knowing. The muslims were the perfect target: there had already been some itch between the USA and the muslim world for many years before Sept. 11th, 2001. Osama Bin Laden disguises himself into a radical muslim cleric and calls for the Jihad against the USA with great success. Most probably the plan was to leave the radical muslim world after the WTC attack but it was so successful, so compelling for many muslim and anti-USA people, that he could not just disappear on Sept. 12th and he is forced to keep acting, to release some speeches on tape from time to time to feed the followers of this radical-Osama.

So, in summary, why haven’t we found Osama Bin Laden yet? I think it is because we are looking for the wrong Osamba Bin Laden. We are looking for a long-bearded Osama Bin Laden, one which is wearing a jallabah and a turban. But according to my hypothesis (which I can not proof), we should be looking for an occidental-looking Saudi Arab, one who dresses just like a rich French or British man would do: Armani suit, most probably without beard or moustache of any kind, doing business here and there and keeping himself far apart from muslims. He might even be pretending to be a Christian or Atheist. I make this proposition to the authorities: go and try to find that Osama Bin Laden, I am pretty confident you will find him.

One more thing: if my hypothesis is correct, Osama Bin Laden might have tried to use other useful fools before the muslims (Hugo Chavez/Fidel Castro, radical jews, the Chinese, etc.) but none of them dared to conduct such an attack on the USA.